3 Types of Electric Scooters for Seniors in March ARB, CA

Beaumont Pharmacy is a leading March ARB, CA mobility scooter retailer. We carry the largest selection of makes and models from the most reputable manufacturers in the industry, and we offer the most affordable prices and work with Medicare to ensure that you can find a motorized scooter that will fit your budget. For years, we’ve been helping the elders of Riverside County improve their safety and maintain their independence with top-quality electric scooters for seniors, and we’d love to do the same for you. For more information or to schedule a test drive, call 951-845-8252 today!

There’s no doubt you’ve seen other senior citizens driving around Riverside County on mobility scooters, and you have to admit that you’re excited to get one for yourself. While there’s no denying that electric scooters for seniors can offer numerous benefits, shopping for one can be a bit overwhelming, as there are so many different types to choose from. To make the process easier, familiarizing yourself with the different models before you head to a March ARB, CA mobility scooter retailer is highly recommended. With that said, here’s a look at the top three senior citizen electric scooter models. 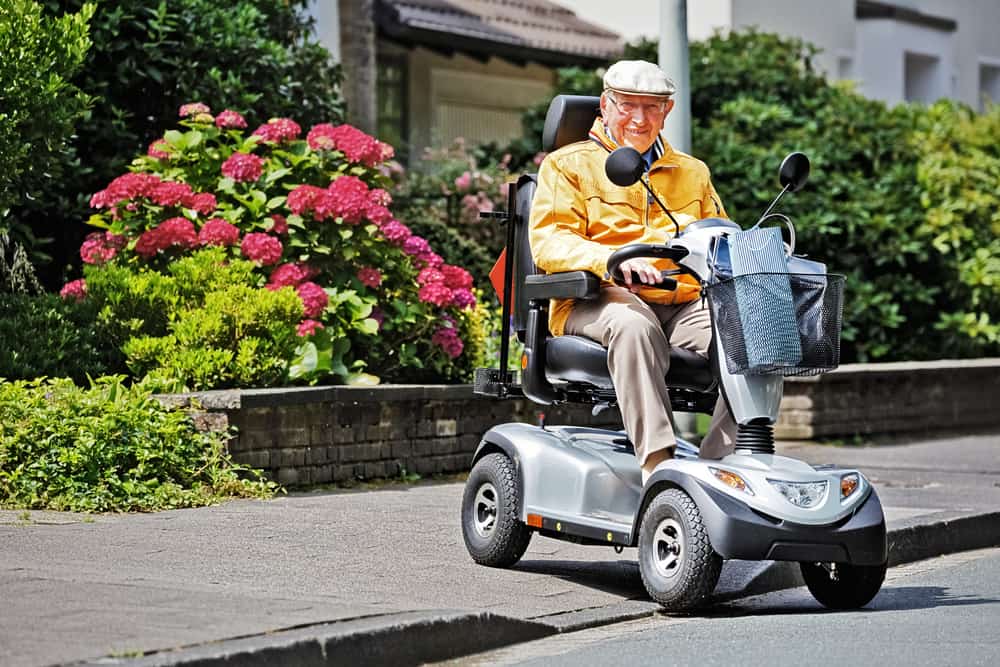 When you’re shopping at a March ARB, CA mobility scooter retailer, there’s no doubt you’re going to see a lot of 3-wheel models, as they’re one of the most popular options. They typically feature two wheels in the rear that are widely spaced across from one another, and a single- or double-width wheel in the front, which is attached to a handlebar, a tiller, or a steering wheel. Three-wheel electric scooters for seniors look similar to a child’s tricycle, but of course, they’re larger and are powered by an electric motor. One of the key advantages of the 3-wheel model is the low turning radius, which allows for maximum maneuverability. They’re generally recommended for indoor use, as they aren’t as stable and can’t manage uneven outdoor terrain as well as other models. If you do intend on using one outdoors, stick to smoothly paved walkways, footpaths, and roadways.

Reputable March ARB, CA mobility scooter retailers will also carry heavy-duty models. If you need a more powerful mobility scooter, this is an excellent choice. They’re specially engineered to deliver outstanding performance. Typically, they’re equipped with heavy-duty drivetrains, which makes them more powerful. They ride on four wheels – two evenly spaced wheels in the front and two in the back – which are usually larger and more rugged than a standard 4-wheel electric scooter, so they can better handle more rugged tertian. Additionally, they usually have front- and rear-wheel suspension, and the seats are larger and offer more cushioning for maximum comfort.

Some information about March ARB, CA

March Air Reserve Base, previously known as March Air Force Base is located in Riverside County, California between the cities of Riverside, Moreno Valley, and Perris. It is the home to the Air Force Reserve Command’s Fourth Air Force Headquarters and the host 452d Air Mobility Wing, the largest air mobility wing of the Fourth Air Force. In addition to multiple units of the Air Force Reserve Command supporting Air Mobility Command, Air Combat Command and Pacific Air Forces, March ARB is also home to units from the Army Reserve, Navy Reserve, Marine Corps Reserve, California Air National Guard and the California Army National Guard. For almost 50 years, March AFB was a Strategic Air Command base during the Cold War. The facility covers 2,075 acres of land.

March is one of the oldest airfields operated by the United States military, being established as Alessandro Flying Training Field in February 1918. It was one of thirty-two Air Service training camps established after the United States entry into World War I in April 1917. The airfield was renamed March Field the following month for 2d Lieutenant Peyton C. March, Jr., the recently deceased son of then-Army Chief of Staff Peyton C. March, who was killed in an air crash in Texas just fifteen days after being commissioned.

The establishment of March Air Force Base began in the early 20th century at a time when the United States was rushing to build up its military forces in anticipation of an entry into World War I. In 1917, in response to news from the front lines, Congressional appropriations attempted to back the plans of General George O. Squier, the Army’s chief signal officer, to “put the Yankee punch into the war by building an army in the air”.

At the same time, the War Department announced its intentions to build several new military installations. Efforts by Frank Miller, then owner of the Mission Inn in Riverside, California, Hiram Johnson and others, succeeded in gaining War Department approval to construct an airfield at Alessandro Field located near Riverside, an airstrip used by aviators from Rockwell Field on cross-country flights from San Diego.